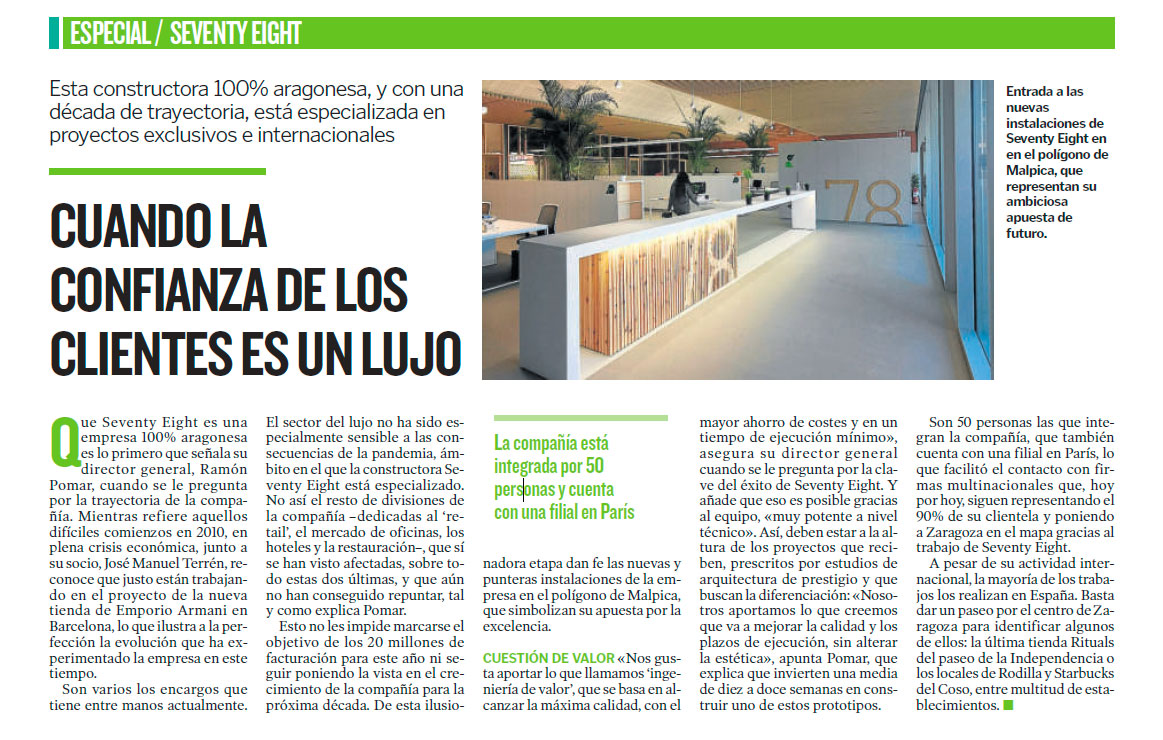 On April 25, the newspaper Heraldo de Aragón published a review of our company in its Construction Special.

We reproduce the news below:

Seventy Eight is a 100% Aragonese company,this is the first thing its CEO, Ramón Pomar, points out when asked about the company’s history. While he refers to those difficult beginnings in 2010, in the midst of the economic crisis, together with his partner, José Manuel Terrén, he acknowledges that they are just working on the project of the new Emporio Armani store in Barcelona, which perfectly illustrates the evolution that has experienced the company at this time.

Seventy Eight has several orders currently in hand. The luxury sector has not been particularly sensitive to the consequences of the pandemic, where the Seventy Eight construction company is specialized. Not so the other divisions of the company -dedicated to ‘retail’, the office market, hotels and catering-, which have been affected, especially the latter two, and have not yet managed to rebound, as Pomar explains.

This does not prevent them from setting themselves the 20 million turnover target for this year or from continuing to set their sights on the company’s growth for the next decade. This exciting stage attests to the new and cutting-edge facilities of the company in the Malpica industrial area, which symbolize its commitment to excellence.

We like to contribute what we call ‘value engineering’, which is based on achieving the highest quality, with the greatest cost savings and minimal execution time, “says its CEO when asked about the key to the success of Seventy Eight. And he adds that this is possible thanks to the team, “very powerful at a technical level.” Thus, they must be at the level of the projects they receive, prescribed by prestigious architecture studios and who seek differentiation: «We contribute which we believe will improve quality and lead times, without altering aesthetics, ”says Pomar, who explains that they spend an average of ten to twelve weeks to build one of these prototypes.

There are 50 people who make up the company, which also has a subsidiary in Paris, which facilitated contact with multinational firms that, today, continue to represent 90% of their clients and put Zaragoza on the map thanks to the work of Seventy Eight.

Despite its international activity, most of the jobs are carried out in Spain. It is enough to take a walk through the center of Zaragoza to identify some of them: the last Rituals store on the Paseo de la Independencia or the Rodilla and Starbucks del Coso stores, among a multitude of establishments.

This website uses cookies to improve your experience while you navigate through the website. Out of these, the cookies that are categorized as necessary are stored on your browser as they are essential for the working of basic functionalities of the website. We also use third-party cookies that help us analyze and understand how you use this website. These cookies will be stored in your browser only with your consent. You also have the option to opt-out of these cookies. But opting out of some of these cookies may affect your browsing experience.
Necessary Always Enabled
Necessary cookies are absolutely essential for the website to function properly. This category only includes cookies that ensures basic functionalities and security features of the website. These cookies do not store any personal information.
Non-necessary
Any cookies that may not be particularly necessary for the website to function and is used specifically to collect user personal data via analytics, ads, other embedded contents are termed as non-necessary cookies. It is mandatory to procure user consent prior to running these cookies on your website.
SAVE & ACCEPT